In 2010 Kirit Dave gave a series of Prabhat Samgiita concerts and workshops in four cities of Southeast Brazil. Similar activities had been happening in the USA also, especially in California and Hawaii, but in a less concentrated form. (See Programs in USA.) Kirit received from the composer himself (Shrii P. R. Sarkar) the task of popularizing and teaching Prabhat Samgiita. And we should say, he does it with great dedication, enormous patience and kindness!

The yearly tours have been occurring regularly in Brazil since 2010 (in 2011 also in Argentina); they consist of an intensive series of courses, concerts, talks and workshops over different cities. Of these programs, some are very short while others are longer, especially the intensive trainings of seven or even nine days (immersion courses or retreats). Kirit has been conducting all these programs, seeking to take the treasure in the Prabhat Samgiita songs to more and more people, with a special focus on teaching and training other people to become instructors and do the same, thereby spreading the movement.

After the first Prabhat Samgiita tour in Brazil, we felt the necessity to study more the pronunciation of the songs (mostly in the Bengali language) as well as their meaning – from the level of individual words to that of the song as a whole. So a group of interested people was formed to start classes over the internet on the Bengali language through the study of Prabhat Samgiita songs in this language. These classes have been going on regularly since then. On the other hand, when we meet in the in-person courses or workshops, most of the attention is on the musical study and practice of the songs. For some years now we also have classes on music instruments – basically tabla and harmonium – in our programs, because of the importance they have in the proper rendering and presentation of the songs.

In the following map we can see an illustration of cities which already hosted programs conducted by Kirit in the USA as also of all the cities included in the tours from 2010 to the present: 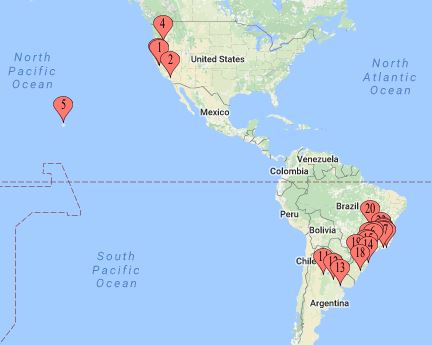 Besides the yearly tours, there had been many programs conducted by local organizers and instructors (without Kirit’s direct participation). Check them out by accessing the page on LOCAL PROGRAMS.

Details, materials and records of each Tour can be accessed by clicking on the following pictures: